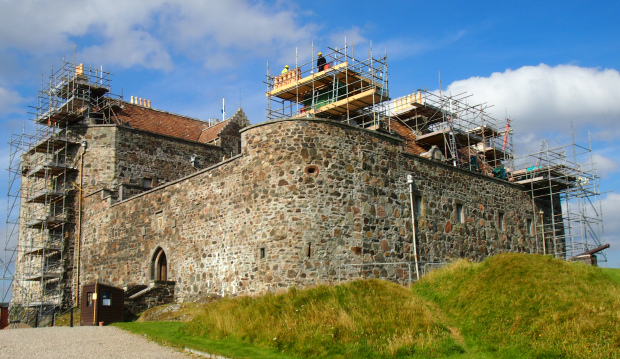 In June of 2012, Sir Lachlan Maclean, Bt, CVO, DL, 28th Chief, addressed the Clan Congress on Mull, explaining that for the last century, the Chief’s family had personally funded the upkeep and repairs that Duart Castle required, but the family could no longer afford the repairs on its own. Sir Lachlan appealed to the Clan Maclean for help with the repairs of the ancient home; the Clan Maclean’s response was unanimous in its support for preserving Duart for future generations, and an appeal for assistance was launched.

Donate to the Duart Restoration Fund

In an effort to recognize donors the Chief has introduced donor categories which for your convenience have been converted to USD*. As all donations are important to restoring the Castle, it will be the Chief’s pleasure to thank donors personally.

For those who have reached one of the following Donor Recognition levels the Chief will be pleased to present them their badge (pin) during the week of June 20-24, 2017 at The International Gathering of Clan Maclean. For those who are unable to attend, their badge (pin) and associated benefit will be mailed after the ceremony.

Chief’s Circle donors will have their names inscribed in stone and Patrons and Life Guardians will have their names written into registers held in the Castle for viewing by the public. In the future, relatives visiting Duart Castle and sighting the names of these donors will feel great pride in the roles their ancestors played in sustaining the Castle.

When a donor gives more than one donation, these amounts will be progressively aggregated over time for the purposes of determining the upgraded donor category and associated benefit.

Duart Castle's keep was built in 1360. When Lachlan Lùbanach, 5th Chief, married Mary Macdonald, daughter of the Lord of the Isles, her dowry included the Duart estate. Lachlan Lùbanach built the keep and the north-west structure. The other two wings were built in the 16th and 17th centuries.

The Macleans lost the Castle in the late 17th century to the Earl of Argyll, who took the Castle and our lands to as payment for trumped-up debts. In 1911 Sir Fitzroy Maclean, 26th Chief, bought back the Castle and spent 4 years restoring it to its present state. The restoration was completed before World War I.

Duart remains one of the few original clan seats that survives as the Chief’s home while also being open to the public. It is also one of the few castles in Scotland that never fell to military power.