HomeHeraldryArms of the Maclean Chief 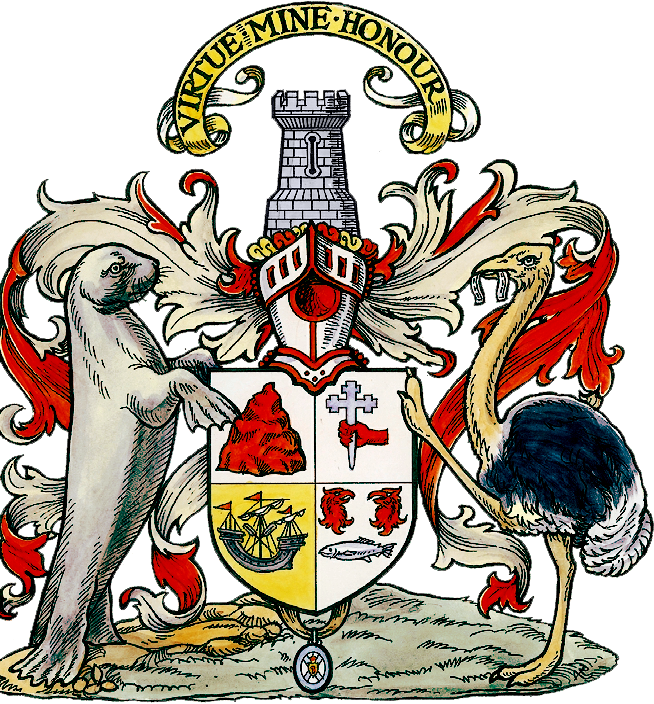 This is the arms of the Chief of the Clan Maclean, House of Duart. These arms are the hereditary personal coat of arms of Sir Lachlan Hector Charles Maclean, Bt, CVO, DL of Morvern and Duart, 28th Chief of the Clan Maclean. This coat of arms was last re-matriculated and recorded in the Lyon Register prior to the 1904 investiture of Sir Fitzroy Donald Maclean, Bt, CB, KCB of Morver and Duart, 26th Chief of the Clan Maclean as a Knight Commander of the Order of the Bath (Civil Division). It is a hereditary piece of property and is therefore passed to his heirs upon his death. It is common to re-matriculate the full achievement of arms every three to five generations. It is not to be used by any other member of the clan as their personal coat of arms. In fact, according to Scottish law, simply affixing a coat of arms to any particular item, makes that item the personal property of the one who owns the coat of arms.

Of the many interpretations of this matriculation of arms, the most comprehensive explication was by Alastair Campbell in his article, A Closer Look at West Highland Heraldry. Much of the following interpretation was derived from Campbell's article.

Charges of the Arms Proper

UPPER LEFT QUARTER - Although many believe that the rock represents the Isle of Mull, Campbell believes that the rock is actually symbolic the Maclean fortress of Cairnburgh located in the Treshnish Isles. It was at the Cairnburgh Fortress that the Macleans regrouped after Duart Castle was conquered by the Campbells in 1681. The use of the rock was first recorded in the Seton Armorial in 1591.

UPPER RIGHT QUARTER - The red hand holding the blue cross crossed fitchée referes to St. Moluag, whom Somerled, a powerful leader in Argyll, considered his patron saint as did the Lords of Lorne and later the Lords of the Isles. St. Moluag was most rembered for founding a hundred monasteries in the 6th century, one of which was on the Island of Lismore, where one of Gilleain na Tuaighe's ancestors was abbot. The red hand is a comon ancient symbol refering to an area in northern Ireland now known as Ulster, St. Moluag's birthplace; the cross crossed fitchée is a reference to Chistian evangalism. When used together in the West Highlands, it recognizes St. Moluag, the Christian evangalist from Ulster..

LOWER RIGHT QUARTER - Although the double eagle usually signifies that the bearer is an individual of action and integrity who is often occupied with weighty affairs, there seems to be a much simpler explanation. The Exchequer Rolls record the fact that on several occasions, the Chiefs of the Clan Maclean supplied hawks to the King for his personal and military use. Since the arms of the West Highland Clans depicted their social and political alliances rather than their bloodlines, the later explanation is most likely accurate. The salmon, in Gaelic cultures, represents eternal life because it always returns to it's birthplace to spawn and therefore a mysterious and important symbol. The silver salmon is a heraldic reference to the nobile Dálriadic origins of Gilleain na Tuaighe

Charges that Support the Arms Proper

It is worth noting that one must be a Peer to the Crown to be entitled to use supporting charges in their full achievement of arms.

SEAL - The specific meaning behind the use of the Seal is unknown. There is strong cause to believe that the seal is symbolic of the geographic location and close ties of the Clan Maclean to the sea since seals are commonly found in the region. The seal is a recent addition, incorperated into the most rematriculation.

OSTRICH - The ostrich usually symbolizes the sincerity and willing obedience. The use of the ostrich as a support charge in this full achievement of arms may be a reference to military and government service to Great Britain, and may explain it's use as a supporting charge in the full achievement of arms. Before the seal was added, earlier achievements included "two ostriches proper with horseshoes in their beaks." Although the symbolism of the horseshoe is unknown, it is very common and typically considered a symbol of good fortune.

Charges of the Crest

TOWER EMBATTLED - There is little doubt that the tower represents Duart Castle which has been in use since it was occupied by the Macleans in 1360. The Tower was originally used alone on a shield as the earliest arms of the Clan Maclean. This is documented in the Lindsay armorial in 1542. The tower is even utilized in the earliest recorded Maclean seal.

BARONET'S HELM - The addition of the baronet's helm to the full achievement of arms most likely occurred when Sir Lochlan was made a baronet in 1631. It would have been customary to rematriculate the arms after the bestowal of such a title. Since then, Maclean chiefs have held the heriditary title, Baronet of Morvern

MEDALLION - The medallion is apparently a representation of a medialian of a Baronette of Novia Scotia. Although these arms were last matriculated on behalf of Sir Fitzroy Donald Maclean in 1904, this medialian would have been added with the Baronet's helm in 1631.

Ensigns Armorial viz: Qarterly first Argent a rock Gules; Second Argent, a dexter hand Fesswise couped Gules, holding a cross crosslet fitche in pale Azure; Third or, a lymphad oars in Saltire Sails furled Sable flagged Gules; fourth Argent; a salmon naiant proper in chief two eagles heads erased respectant Gules. Above the shield is placed a helmet befitting his degree with a Mantling Gules doubled Argent and on a wreath of his liveries is set for Crest a tower embattled Argent and in an Escrol over the same this Motto, “Virtue Mine Honour” and on a compartment below the shield are placed for Supporters on the dexter a seal proper and on the Sinister on Ostrich with a horse shoe in its beak proper.